CWIEME: The evolving landscape of inverter technology in EVs

The automotive industry is slowly but steadily moving toward an electric future.

The automotive industry is slowly but steadily moving toward an electric future. Several factors are at play that will determine the pace of this transition from internal combustion engines (ICEs) to electrified vehicles. One of the key factors is certainly the performance of the EV, especially the range that it will offer in the real-world driving conditions.

Slapping a bigger battery onto the EV will give the additional range, but that will significantly add to the cost and weight of the vehicle and is not likely to tip the scale in favor of EVs. The answer to this challenge lies in improving the performance of the vehicle by using the available power in an optimum way. One of the ways is by using an efficient traction inverter.

With growth in the sales of alternative propulsion vehicles, the demand for high-voltage inverters has also significantly grown. This demand is expected to grow proportionally to the production of electrified vehicles.

Based on the level of electrification and the vehicle sales segment, there are different types of inverters currently used in an EV with different switching technology and semiconductor material. These include inverters with silicon-based switching devices, such as metal-oxide-semiconductor field-effect transistors (MOSFETs) and Insulated-gate bipolar transistors (IGBTs), and wide-band-gap material (silicon carbide (SiC), or gallium nitride (GaN)–based switching devices.

Road ahead for inverter technology in EV segment

Silicon-based (Si) MOSFET is one of the oldest switching technologies to be used in the automotive industry. Si MOSFET inverters are mostly used in mild hybrids but do see some use in low-voltage hybrids as well. MOSFETs have three terminals, which are the source, drain, and gate terminals. MOSFETs are more efficient in low-voltage applications of up to 100V and peak power of 20 kW. This is due to the ability to operate at a high frequency with lower on-state losses and low-voltage drops.

However, Si MOSFETs are known to have higher conductance losses, which makes Si MOSFET inverters less efficient as the system voltage increases. Due to this drawback, Si MOSFETs are likely to lose favor with automakers as they develop more high-voltage vehicles. The number of high-voltage vehicles (450V to 1,000V) is expected to account for 39% of total electrified vehicles in 2033, compared with 23% in 2021.

Si IGBT inverters are the most widely used inverters in the light vehicle segment, with a market share of more than 68%.  The demand for IGBT inverters will grow at around 12% CAGR between 2021 and 2033 to more than 57 million units, of which more than 52% will be equipped in BEVs.

Currently, IGBT inverters find the most use in full hybrids, but by the end of the decade, as the demand for all-electric vehicles increases, BEVs will be the leading segment for IGBT inverters. IGBT has proven to be a lot more efficient in full hybrids and BEVs as they are rated for more than 1,200V, compared with 600V for MOSFETs.

IGBT inverters are best suited for powering traction motors between 35 kW to 85 kW, making them a good fit for entry- to mid-level BEVs. Compared with Si MOSFETs, IGBT have a lower switching frequency but higher tolerance to electrostatic discharge. IGBT also boasts of lower conduction losses at higher voltages.

Although IGBT inverters are sufficiently efficient for the current-generation EVs, they do face challenges as the demand for efficiency increases due to limitations of the silicon material. As a result, the automotive industry is increasingly moving toward an SiC-based inverter, which offers better characteristics. SiC is a wide-band-gap material with a band gap of 3 electron volt (eV) compared with 1.1 eV for silicon. This allows operations at much higher voltages and at higher temperatures.

However, SiC inverters are still relatively expensive and are more preferred for premium-segment BEVs. However, as the cost comes down, their use in hybrids will also increase owing to their high efficiency. By 2033, more than 20% of SiC inverters used by automakers will be in full hybrids. Global demand for SiC inverters from the light vehicle segment is expected to increase at a 32.6% CAGR to around 45 million units between 2021 and 2033.

GaN is another wide-band-gap material that is being considered in the automotive sector due to its higher band gap of 3.4 eV. GaN has even higher efficiency than SiC in certain voltage architectures. GaN inverters are yet to be used in a commercially available EV and is only expected to hit the market at a later stage. GaN technology still faces some technical constraints in terms of its applicability in high-voltage applications (~400V+ vehicles architectures) that need to be solved before it can become a mainstream technology. 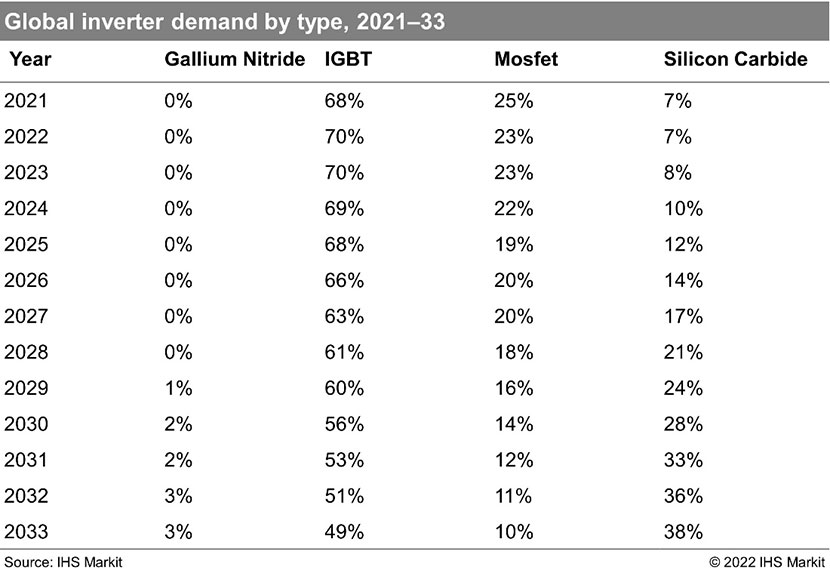 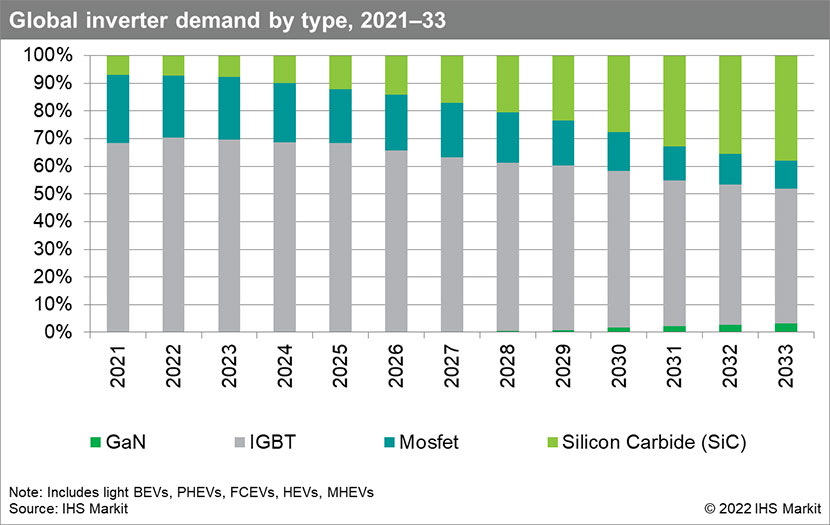