Gulf Cooperation Council (GCC) is an important and one of the larger regional transformers markets around the world. Given large infrastructure projects in Saudi Arabia, followed by big projects including world cup in Qatar and new generation projects in UAE, the demand of transformers in the region is still ample, despite the setbacks like Covid-19.

The share of Gulf Cooperation Council (GCC) countries stood at around 3.7% of the global transformers market, which accounted for 863 million USD in 2020. Most of the demand originated from Saudi Arabia and UAE followed by the rest of GCC countries including Oman, Qatar, Bahrain, and Kuwait. In 2020, due to Covid-19 and associated lockdowns, transformer demand from the O&G sector was hit the hardest as development works on upgrading and commissioning of refineries and petrochemical facilities was delayed. Further, the infrastructure and utility sector in the region observed a similar decline of 10% in 2020. However, it is significant to note that amid all this, projects were only delayed not cancelled.

The Supply Side – Transformer Manufacturers

Given the pandemic, capacity utilization of transformer manufacturing facilities globally declined around 15-16% in 2020.  Lead times of power transformers also increased by approximately 12 weeks during 2020 due to shortage of freight services and since power transformers are mostly imported in the region so this affected the market.

Mergers & Acquisitions in the Market

Recently, there has been some movement by companies in the market, where regional entities have acquired assets abroad as part of their expansion efforts. Saudi Arabia’s Electrical Industries Company (EIC) finalized its acquisition of CG Power Belgium transformers factory for about 5 million Euros. The assets acquired by EIC include machinery, equipment, inventory, and software for designing transformers and mobile substations and intellectual property rights. EIC is currently in the process of restarting the manufacturing unit in Belgium with these assets.

Saudi Arabia’s share of the GCC transformer market in 2020 was around 35% or USD 302 million. The O&G sector was hit the most (a decline of 30% YoY in 2020), largely due to the delay in development works on oil refineries. The infrastructure sector followed the GCC trend and reported a decline of approximately 6%. However, interestingly the Saudi Electric Company (SEC) invested in 2020, expanding their network and reported growth instead of decline. Looking at the sector specific growth drivers in the country:

In 2016, when Saudi Arabia unveiled its Vision 2030 plan, it set a goal of producing 60 GW of renewable energy by 2030, but little was installed. In 2021, the country reaffirmed its commitment to increase the renewable share in its energy mix to 50% by 2030, which in turn will result in renewable investments increasing transformers demand. 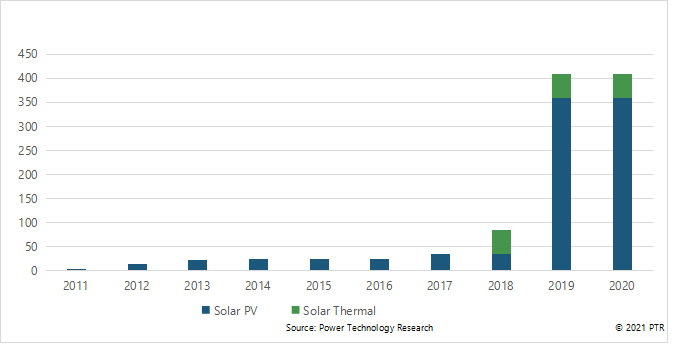 The following projects, worth billions of dollars, are expected to drive demand of transformers from the industry in coming years in Saudi Arabia.

Looking at the second largest market in the region, UAE’s share of the GCC transformer market stood at around 33%, accounting for 284 million USD. The UAE transformer market dropped drastically, by almost half, mainly due to the slowdown of development work in refining and the petrochemicals industry. Dubai Electricity and Water Authority (DEWA) reported a decline of almost 20% relative to 2019 owing to Covid-19 delays. Looking at what caused this decline in demand within each vertical:

UAE’s renewable generation capacity started to pick up pace from 2012 onwards and unlike Saudi Arabia, renewable capacity was installed in in 2020 as well. Most capacity additions in the country fall under the solar PV category with most being installed in 2019, amounting to 1,320 MW, followed by 621 MW installed in 2020.

Barakah is UAE’s first nuclear power plant which began partial commercial operation in April 2021. Barakah is a USD 32 billion project with a generation capacity of 5,600 MW with four units of 1,400 MW and is expected to provide one fourth of country’s total electricity needs. Moving forward, the remaining units of Barakah along with UAE’s ambitious plans of installing 42GW of renewables by 2050, will drive the demand for transformers in the generation sector. 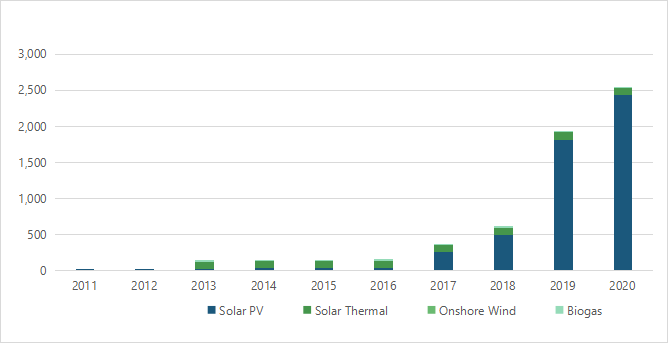 Demand for transformers from industry will originate from the following mega projects expected to be installed in the coming years:

Demand Side - Rest of GCC

The rest of the GCC region, constituting of Qatar, Oman, Bahrain, and Kuwait contributed the remaining 32% of the market accounting for 276 million USD. A lot of this demand originated from specific industrial infrastructure projects with utilities and generation contributing relatively less compared to the case in Saudi Arabia and UAE. Looking at the individual verticals:

For the rest of GCC countries, most of the expansion was observed solely in Qatar Electric and Water Company. Other utilities in these countries did not experience significant activity leading to slow transformers demand from this vertical.

Qatar which depends on natural gas followed by oil products to generate electricity had no significant renewable capacity additions previously but in 2020, the Al Kharsaah Solar PV IPP Project started development. Starting in 2021 with an initial capacity of 350 MW, the project will reach full capacity, 800 MW by 2022. Renewables to some extent will be the market driver in the future too, however, the generation mix is expected to favour conventional generation moving forward too. 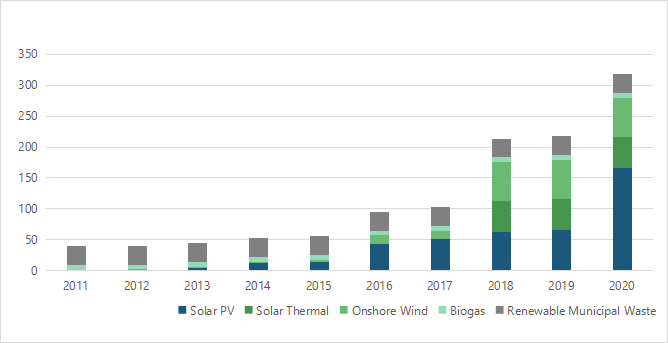 The following industrial projects in the rest of GCC are expected to drive demand for transformers in coming years:

According to Power Technology Research, the transformer market of GCC countries experienced an average decline of 5% in 2020 where Kuwait’s market experienced the most significant dip. Moving forward, the market is expected to recover slowly and grow with a significant CAGR of 10% from 2020-2025. Almost, half of the demand in this period will be generated from infrastructure followed by the T&D sector at around 20%. Geographically, almost half of the demand (2020-2025) in the region will be generated from Saudi Arabia followed by 25% demand generated from UAE. As far as the post-covid recovery of the transformer market in individual member states are concerned:

Overall, the region experienced some setbacks in the last few years exacerbated by the pandemic. However, the transformers market is slowly recovering, as the large infrastructure projects are being commissioned. How long will this renewed momentum last will largely depend on how long the governments can fund these mega projects.

Azhar Fayyaz is a Market Analyst at Power Technology Research. He is involved in projects on the power grid topics at Power Technology Research gathering data on network structure of distribution utilities, estimating the installed base of T&D equipment, and analysing the information to predict future market trends. As a market analyst at PTR, he performs competitive analysis of different companies operating in a region and determine their market share for a specific product. He also has more than 2 years of experience working as a senior shift engineer at Chashma Power Generation Station. Azhar comes from a technical background and has a M.Sc. in Power Engineering.